Finally got out this afternoon for a fish. KGWs are a bit slow with all the fresh water coming down. Managed 8 good ones and another 8 or so small ones I sent back. Out at 3pm back at 6-30pm. Best bites on the flood tide. Prawn and mussels. South of Flanagan island
There's nothing . . . absolutely nothing . . . half so much worth doing as simply messing around in boats.
Kenneth Grahame, The Wind in the Willows (River Rat to Mole)
Top

Inspired by the post above I ignored the breezy arvo forecast and (fool heartedly?) headed out to Flanagan's once more. Fished 2 -6pm .Wind, rain calm, more wind....Very slow going. 3 moves 6 bites for 3 fish 36 34 32. Dinner caught headed home to Paynesville with a 20 kph NE blowing. No fun in an old 4.3 tinny, which ran quite nicely after its 8 year service ( though trim is kaput at the moment) and conditions were too rough to retrieve at Fort King boat ramp safely if the truth be told. But no plan B and with no fenders loaded the cracked left hand windscreen is now completely buggered and the intermittent portside light is now even more intermittent on account of being at the bottom of Lake King. Trailer ( and jetty) got a pretty good pounding too even though I was waist deep wrestling the boat onto it as carefully as the increasingly rough conditions allowed. Bloody wind eh? No let up till Thu forecast. Lesson learned...load a fender!
Boat Safe & Tight Lines
Pirkz
Top

Hey Pirkz
After a couple of similar experiences I put a boat latch on the boat/trailer. It is one of the very best value boating investments I've made, it makes retrieving and launching much much easier and faster especially without a decky.
GT
Top

Almost cut the grass yesterday... almost.... but made the mistake albeit late on in the day of looking at the Lakes Charter FB page and saw reports of KGW up to 47 cm. So an hour later around 2pm saw me facing the second "mistake' of the day launching rather haphazardly it must be said at Nungurner. Eventually doable... but it involved a lot of p*ssing about and liberal use of expletives as the shallow, narrow remains of a concrete slipway and relatively tight reversing angles/ area are not best suited to launching a heavy 4.3m tinny on a breezy day (so a Metung launch on future breezy days!). But mission accomplished I headed up to Nyermilang to collect some mussels before heading around the back of Flannagan's once more. Only 1 other boat out (the joys of semi - retirement), and expectations were high after the report from the early shift that day. Mussel and prawn for bait as usual. But despite fishing a few of last years old favourite markers off of the Navionics app...... nowt.... other than a solitary salmon and a toady.
2 pm became 3 became 4:45 and with a planned lines up time of 5pm I made one final move towards the south / middle of the island in 2.6 m with just some intermittent weed showing and finally hit paydirt. Stayed for an hour for 10 - 8 x 38-34 ish and 2 returned around 30 cm. Left em biting in the hands of a previously encountered fellow fisher, who I called over (as he was mooching about obviously not getting much) to moor up beside me as I was about to leave - and it would have been a shame to waste a good bite. So KGW in tempura batter for T , albeit an hour later than originally planned. Just to add I used re -tyred's method - sort of - on the mussels: collected a few dozen then added about half to a small bucket and emptied the hot water from the thermos onto them - bingo - easy to open and, being partially cooked, more durable on the hook; which was very handy when the bite finally came on as it was more expeditious than trying to open fresh ones when catching quickly. Now to check FB to see what I could have caught this morning.....
Tight lines
Pirkz
Top

Good to see it paid off in the end mate!
Nice feed. Well done

Breezy arvo on Sunday with a lively Westerley kicking in by lunchtime so no scenic tour to Flannigan's . However not to be outdone, and, threatened with 'chicken for T' decided late on in the day to nip across the back of Raymond Island to fish some old Navionics marks in Woolaston Bay and see if the KGW had moved further up the Lakes system. Fished in thinner / less weedy areas in 2m from 5-7pm and pleased to report that I came away with 6 fish (36-38) from 10 good hits on prawn. Buoyed by the change of the KGWs postcode decided to go out again yesterday despite a fresh breeze, (which was forecast to drop mid arvo), and fished the same area (Northern end of Woolaston) but the wind got up (not down!) to a stiff SW 30+kph which was uncomfortable/unsafe and far too lively for a small tinny. So with only 3 fish landed made a wet and very cautious retreat after only a couple of hours. Noted at the ramp that another fisher (6m+ Haines Signature very nice) had had similar success with a mixed bag of salmon and KGW from the southern end of Woolaston fishing in 2.5m. So all good till about May, and that'll be 10 litres of fuel saved per trip!
Tight lines
Pirkz
Top

Well back to the usual KGW haunts today. Went early, before sunrise. Should of slept in. Didn't get a fish in the boat till 7-30am. Cracking KGW. Then nothing. Moved around. Made my way over to some locals who were getting an odd one. Not close enough because two of the fifteen boats gathered together, started catching fish after fish. Managed another two , while a nearby boat got his bag. He left ,a couple of others moved into the spot. The caught nothing. No one landing anything, so headed of to another spot. 9am and the rod bends and I'm on. Cracking 40+ KGW. Followed that up with half doz Toadies. Four fish in the Esky. 9-30 I am just about to call it quits. Last cast, zzzz off it goes soon as it hit the bottom. Oh well I'll try a cpl more casts, Ten minutes there are eight in the Esky. Then more Toadies. Called it quits went home. 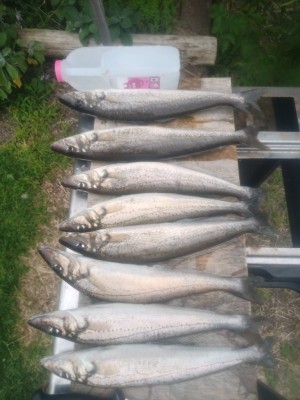 There's nothing . . . absolutely nothing . . . half so much worth doing as simply messing around in boats.
Kenneth Grahame, The Wind in the Willows (River Rat to Mole)
Top
Post Reply
177 posts