The Reel Screamer and Others..

The Reel Screamer and Others..

I finally caved in!!!!
i Used Gulp, couldnt help myself, the stink was too good to resist. there's something about foraging in that gulp tub and then having a good ol sniff of the feline fragrance that just works, to catch fish that is..

Last week seen myself and my cousin head out to hunt some reds.
he has been a bit busy lately and has only just managed to get time to fish, i took him out in the hope of getting him onto his first proper red.
we marked up some fish and drifted right over them and in textbook fashion he hooked up to a fish which was his PB. 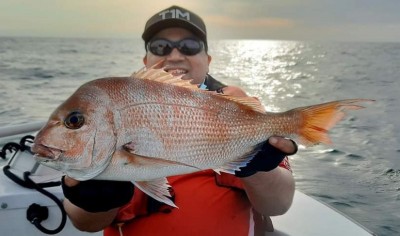 we bagged out that trip with pan sized fish. 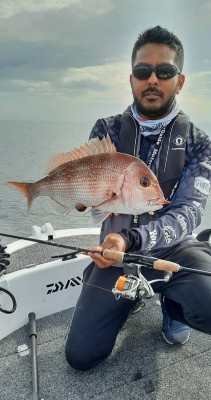 the next trip i took him again.
we marked up some fish and he beat his PB again. couldn't be happier. I got into a decent fish as well 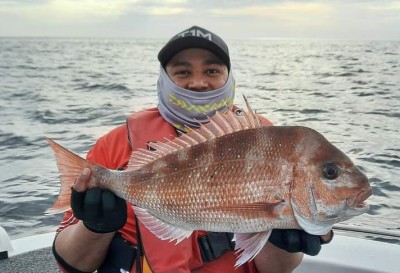 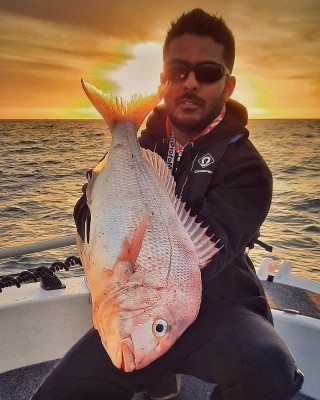 Next trip we tried a different spot, not much happening on the sounder, but still decided to swim a few lures to see if there was anything sitting outside the sonar range (always worth a shot)
the very first cast got annihilated, the Luvias was screaming and line was disappearing a bit too fast for my liking, in what seemed like seconds half the spool was emptied in a blistering first run, almost like a jewie does. i called for a chase, my cousin isnt very experienced with handling a boat but he managed to give a short chase and we slowed the fish down and slogged it out. if theres one type of headshake i hate, then this fish had it and lots of it, its a weird one where the headshakes are almost always followed by a jolt/thud and if you werent on the ball slack line, almost feels like the hooks pulling slowly away...running light leaders and fine gauge hooks meant you had to be at your best game and your gear up to scratch to have half a chance of landing fish like this.my heart was definitely in my mouth and i could feel myself getting quite nervous, slowly but steadily the fish finally surfaced.. i actually though it was going to be a lot bigger by its account of itself earlier in the fight, but it is what it is... 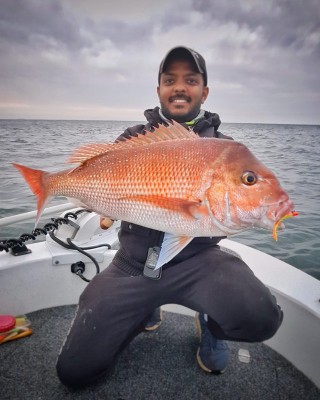 we finished up the day after that and headed home as the bite window had pretty much finished by the time the fish was laded and pics were taken.
this is always a problem as i love to have pics of good fish, but that also means not fishing the prime bite times for me and also the person who is sacrificing their time to take the pic for me. for that i am always greatful


I did a story on instagram letting people know what's been working for me and what I've been doing to help me land fish, so ill make it a short and sweet post here as well.

1. Learn to read you sounder, this is very important to me and I rely on it 100% to find what im looking for

2. The next thing is learn to mark the fish and how to drift over it properly or for people fishing bait, how to anchor properly so you sit on those fish rather than off them.

3. I use my lowrance point 1 sensor and motorguide xi5 along with my sounder to anchor over the fish or to drift over them at the right position.
The point 1 is an invaluable tool for me when drifting as it lets you know your exact position and also which way your boat is pointed at any given time. That way I know which way to cast to get to the fish or structure I have marked .
It is also very handy when drifting for squid.
I understand not everyone can afford the latest and greatest technology, but if you can afford it then by all means get it, its definitely changed the way I fish and the results are speaking for themselves..

4. If you can fish tide changes that correspond with a sunset or sunrise then thats even better, but not always necessary.

Lure fishing is all about finding feeding or active fish, if they are not responding then time to find another patch that will

I hope this is of help to someone here.

Good job on the plastics

how light are you going with your line and leader?
Top

Thanks fellas. Been a good season indeed for myself. Still learning heaps along the way.

Ben.
The last fish was landed on a black label 2-4kg rod, luvias 2506 reel with 8lb shimano karikai x4 braid and 8lb leader.
I also have a second outfit that is a bit heavier a 3-6kg rod, 2500 reel with 12lb braid and 14lb leader. I use this even in using bigger plastics and heavier jigheads etc
Cheers
Still learning to Anchor

Ben.
The last fish was landed on a black label 2-4kg rod, luvias 2506 reel with 8lb shimano karikai x4 braid and 8lb leader.
I also have a second outfit that is a bit heavier a 3-6kg rod, 2500 reel with 12lb braid and 14lb leader. I use this even in using bigger plastics and heavier jigheads etc
Cheers

Have you read the review yet?
Still learning to Anchor

Ben.
The last fish was landed on a black label 2-4kg rod, luvias 2506 reel with 8lb shimano karikai x4 braid and 8lb leader.
I also have a second outfit that is a bit heavier a 3-6kg rod, 2500 reel with 12lb braid and 14lb leader. I use this even in using bigger plastics and heavier jigheads etc
Cheers

don't worry about the smaller fish mate, the bigger fish will come eventually. I also started with the matchbox sized ones and progressed to the bigger models slowly. Give it time.
I would try fluorocarbon leader and drop to 6 or 8lb for the smaller fish. Good luck..
Still learning to Anchor