canned_tuna wrote:Keep a couple of plastic straws from maccas in the boat...make sensational trolling lures for sambos cut in small pieces :cheers:

Except I also cleeaned out the rubbish, which included a few straws.
Top

Sorry for the late report but just in case anyone was thinking of heading to Mornington... fished there this morning with my two boys and we had a great session.

Headed out from the ramp around 7am and as soon as we got past the pier we saw the salmon busting up. There was one kayak guy there and for the next hour and a bit it was mayhem with baitfish being herded up and baitballs on the sounder. The boys managed to land five and lost heaps. I spoke to the kayak guy who says that the salmon have been around for the last three weeks. He landed a stonker of around 3+ kg. It looked like a rat king!

They were very finicky with the lure they were taking. Maybe due to the bait fish they were feeding on. Very small white bait? Sometimes they would go deep and you had to drop your lure/jig to the bottom. The fish were averaging around 1-2kg. 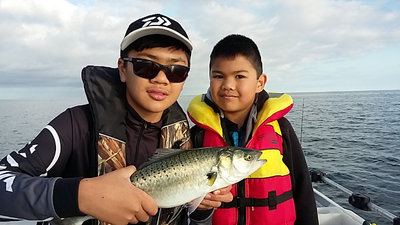 One of the smaller ones. Jasper's first salmon.

When we had enough of the salmon we then went after the squid. We got our bag mainly over in front of the "special" beach were i had to explain to the boys that this was a private area and not for the general public. Jasper also got his first squid ever. So a most successful session. Calamari rings for xmas. 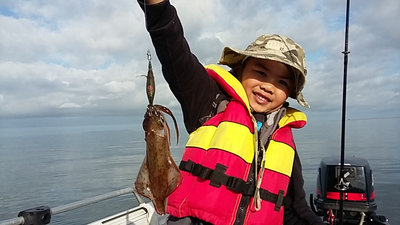 That’s awesome mate! Good to see the boys had a lot of fun :thumbsup:
Top

Although i been there few weeks back and there's was no salmon. Maybe because i went towards frankston rather than mt martha side.
Will try again soon if i get a chance
Cheers
Small Fish Specialist

Forgot to add to the report, it was thanks to Wooly's post that we did come prepared because we were primarily targetting squid. Just amazing seeing the bust ups! My little one couldn't believe it. He also had very sore arms after fighting the sambos.

Although i been there few weeks back and there's was no salmon. Maybe because i went towards frankston rather than mt martha side.
Will try again soon if i get a chance
Cheers

The kayak guy said they've been going from sunrise for an hour or two straight out from the pier..
Top
Post Reply
18 posts