Just got back from a few days fishing in Inverloch with my old man with the goal of catching come land based KG’s. We fished the inlet at pensioners point everyday. First day we wet a line for the sake of it once we arrived. Didn’t check tides or anything and as expected donuts. Next morning we arrived around 7.45 - 8.00am (had a larger night than planned the night before so we were a bit slow to get moving) Few small fish being pulled in (bay trout, flathead, trevally and of course toads) but no tings. We put it down to our late arrival and vowed to return earlier the next morning. Yesterday we arrived at 6.30 - 6.45 am and come 7 the whiting were on! Two whiting in two casts for me ( roughly 35cm each) which came home for dinner. The wind picked up shortly after that and swept in a lot of weed. So although the whiting were still around hookups were harder to come by and few and far between. Still saw a few other guys pull in a few which was good to see. Both my tings were caught using a paternoster rig but a light running sinker rig (red beads above the hook) were causing the most bites and fish along the beach. Happy 2019 everyone. Tight lines! 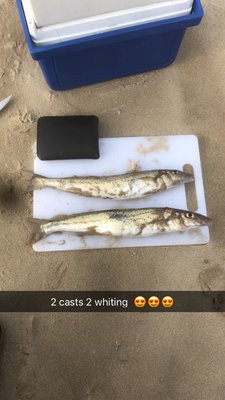 2 fish in 2 casts, well done!
Plenty of whiting in western port from the sounds of it.
Thanks for the report, might head there next week.
Top

Return to “Melbourne Land Based Fishing”