Media release
Monday 14 January 2019
ANGLERS PRAISED DURING OPERATION ABATE
The recreational fishing community is being praised for doing the right thing and largely sticking by catch limits following the completion of Operation Abate, during which nearly 2,700 anglers were inspected by Fisheries officers on Port Phillip and Western Port.
Victorian Fisheries Authority Acting State Manager Operations Chris Angwin said uniformed and plain-clothed officers undertook patrols from boats and the shore, through daylight hours and at night during the four-week blitz.
“The vast majority of fishers were obeying minimum sizes and daily bag limits, which is terrific to see. Our overall compliance rate was 93 per cent, with no boats seized and no serious offences detected that require court prosecution,” Mr Angwin said.
“Some infringement notices were issued for exceeding the snapper catch limit, fishing without a licence and fishing inside marine sanctuaries at the Jawbone and Ricketts Point.
“Officers also reported, unlike previous years, several anglers were keeping undersize flathead to use as bait. Keeping undersize fish, even for use as bait soon after they’re landed, is not permitted.
“Some anglers were surprised to be asked about their boating safety equipment during inspections by Fisheries officers, who are also authorised under the Marine Safety Act.
“We encourage all boating anglers to check they have flares in date, enough lifejackets of the right type for everyone aboard, and a working fire extinguisher in an accessible spot.
“We want people to enjoy their time on the water and be prepared in case the unexpected happens and they find themselves faced with an on-water emergency.”
Mr Angwin said the biggest snapper observed during Operate Abate was 8kg and that the season had been one of contrasting fortunes for many anglers with good catches some trips and not others, and generally more productive snapper fishing in Western Port.
“Excellent catches of yank flathead had been observed, with kingfish showing up more recently at Port Phillip Heads and King George whiting on the increase in both bays in what is expected to be a very good season for them.”
Anglers and the public are encouraged to report any suspicious or illegal fishing activity to 13FISH (133474), anytime.
Media contact: Sarah Hetherington, Media and Communications Adviser, 0409 405 639 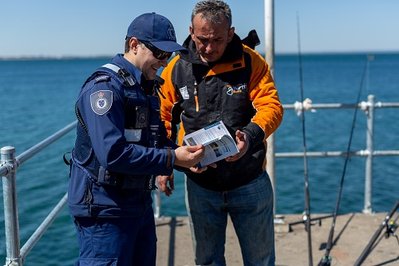